I've given dankarran.com a quick lick of paint, basically changing the orange highlights to blue ones.

This week I've been out in Germany at the DrupalCon Munich 2012 conference, finding out what's going on in the Drupal community, learning some better practices and seeing what is going to be coming in the next big version, Drupal 8 (hint: big things, nice things!). When you see all the great things being built by the community, for the community, you can't help but feel a bit guilty that you haven't even updated your personal site to the latest release. So, this update wasn't just a change of colour, but also an upgrade of Drupal - the free software that runs this site - to the latest version, Drupal 7. There may still be some rough edges, so mind where you step. 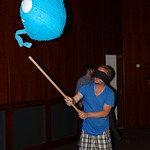 At the end of the Drupal Trivia event last night (my team got a score somewhere in the middle of the crowd) the question was asked if anyone was celebrating a birthday that day. Nobody was, but with about half an hour to go before my 30th, I was next to do so, and was invited to try and break the Drupalicon Piñata. Stuffed with t-shirts, stickers, sweets and balloons, I think it was a great idea, though I did wonder if I was ever going to manage to actually break it open.

Thanks for helping me celebrate my birthday, DrupalCon! See you at DrupalCon Prague next year...

After two years of working from home, I've decided it's time to make a move back into an office and look for some contract-based or perhaps permanent work in London.

I have four years of experience using, developing and helping guide the development of Drupal projects as well as a background and interest in all things geographic, from maps to open data (as you've probably seen from the topics I cover in my blog). With these skills I am looking to find some work as a Drupal developer for an organisation based in London, ideally integrating my geographic interest. Alternatively, I'm open to other opportunities that I may be suitable for.

If you have, or know of, any positions coming up from January onwards, I'd love to hear from you to discuss the details. You can find out more information about me in my CV (pdf) or on my LinkedIn profile.

I've been back in London for almost two years now and haven't met that many people working with Drupal, partly due to working from home I think, but also because there don't seem to be too many events (outside of paid training events and the like) that are aimed at Drupalers in the London area.

As I was looking today to find out if there were meetups happening already that I wasn't aware of, I came across a thread on groups.drupal.org asking about regular meetups, and left a comment to say I'd be interested if there was anything happening. In a city the size of London, there are surely enough people working with Drupal to get a group of people together every now and then for a social event. I for one would love to meet more people in the area who are working with Drupal, and maybe have a pint or two in the process.

By the end of the day, there was a meetup organised: London Drupal Pub Meet- September Meetup. Brilliant!

If you're interested in coming along, sign up to the meetup.com event, and I'll see you there!

edit: the event will be held from 7pm on Monday 28 September, at the Square Pig, Holborn.

It is looking like June is going to be quite an interesting month for participation, with a couple of projects being set up to focus on certain parts of Drupal for the month.

Last week, Advantage Labs announced Geo June, a month of focused development on the geo module. The geo module has a lot of potential to become the basis of the GeoCMS that Drupal should be (as long as the module stays generic enough), and Advantage Labs are keen to get more people interested and involved to help make that happen. During the month there are a number of physical events, but you're also encouraged to share your use cases and join in day to day with the IRC chat in #drupal-geo.

The Drupal User Experience Project also yesterday announced the launch of Microprojects to encourage user experience (UX) professionals to get involved in small bounded problems, working with a Drupal developer to implement their designs and suggestions for improvement. This seems like a great idea, not only because it's breaking down some quite large problems into bite-size manageable chunks, but also to get some outside experts - who may not have previously used Drupal - involved in the community.

If you're interested in either of these areas (or any of the other sprints which are happening), why not jump in and get involved. Having not spent much time on the Geo project yet, I'm looking to spend some time getting to know it in June and hopefully help to push it forwards, as well as starting the rewrite of the KML module to simplify it as a views display type instead of a bundle of custom code.

OpenBand has today unveiled its new OpenBand Labs website to help improve the information around the work we've been doing over recent years as well as hopefully invite some discussion.

We hope to make some improvements to the new site over the coming days as we continue to add some more information and blog about some of our experiences here at DrupalCon. We'll also be adding the slides and some writeups about the XMPP talk Darren gave yesterday and the distributed enterprise talk Ben gave today.

We had a great presentation yesterday with Darren Ferguson talking about the XMPP Framework, and today with Ben Lavender talking getting a chance to demonstrate our collaboration platform.

I'm in Washington, DC this week with many of the rest of the OpenBand / M.C. Dean team. We're all here to visit DrupalCon DC and meet our friends and associates in the Drupal community as well as present some of the things we've been working on.

A couple of the sessions that we proposed have been accepted, so we're going to be presenting:

If you're interested in the work we've been doing to help distributed enterprises communicate better, feel free to come up and say hi. We look forward to meeting you at DrupalCon!

I was working the other night to create an integration module that would tie the existing Activity Stream module for Drupal into the Brightkite location-based social network.

The idea is that users can check in at their current location using Brightkite and have their Drupal site update their location within the site based on their last known location - handy if you want a little map that shows where you are, for example, but you could do whatever you wanted with those locations, and even use them to extend a social network you might be building up in Drupal.

While I was fighting with the SimplePie feed parsing library to work out why it didn't like the feeds from Brightkite, John McKerrell suggested that some integration for his new Mapme.at service would be nice too.

So, the first two services to be supported by the new Activity Stream location services project are Brightkite and Mapme.at. I'd also like to extend this to other services like Yahoo's Fire Eagle and Google Latitude at some point, but neither of them are quite so simple to integrate with, the former because it has no public location feeds for users and requires authentication, and the latter because it doesn't share any of its data at all (boo!).

In their most basic form, the modules pull in the updates from these services and they get included in your activity stream along with your Twitter updates and the like, but also if you have Location module installed and the user locations module enabled (plus a patch for Activity Stream for now), your user will be updated with the latest coordinates from the location service you use.

The new website for Ballavayre Cottages went live recently to give a new online presence to this 5 star self-catering accommodation in their 200 year old cottage in Colby, Isle of Man.

The site, built on Drupal, allows the cottage owner to change content as and when they wish, and also to update their availability calendar to let visitors know when the cottages are available.

To help visitors see at a glance where the cottages are located, and to give directions from the sea terminal and airport, we included a series of custom built maps, designed (with some very helpful tips from Steve Chilton) using OpenStreetMap data.

It is always great to help promote the Isle of Man as a tourist destination, even in a small way, by giving accommodation providers a chance to promote their services to a wider market.

It's amazing how much spam is generated when commenting is enabled on a blog. When I first launched the Drupal version of dankarran.com, I had commenting enabled for new posts but had it set so that administrator approval was needed before any new comments went live. Coming from a MovableType blog previously, I was used to doing this as I received tons of spam on that blog and had to moderate there as well. It's not a good user experience to expect people to wait until I approve a comment though, so I was keen to let users post directly.

When the site first launched, there were very few spam comments, so leaving comments open seamed feasible, but very soon - as spammers started to pick up on the changes - they started arriving in droves, and that was just on the few comment-enabled posts that I had created since launching.

Not wanting to impede people's commenting with a captcha for every comment, I avoided Drupal's captcha module and instead opted to try out the Mollom module as an interface to the Mollom spam filtering service created by Dries Buytaert, the founder of the Drupal project.

Mollom is a free service that checks all the comments (and/or other forms) posted for known patterns of spam, blocking it where appropriate, and letting real user-created comments through unhindered. If it's not sure whether it's spam or ham (the term for real content), it then presents the user with a captcha that the user can fill in if they have been mistakenly flagged as possible spam.

So far, the service has been great, with 588 spam messages blocked in the past 16 days, the busiest days being Christmas Eve and Christmas Day with 260 spam messages between them. I'm very happy to be a Mollom user! Sorry spammers, it's nothing personal, honest.

From the start of 2009 I am going to be self-employed, and while I will still be working much of my time on the projects I've been working on for the past three years at OpenBand/M.C. Dean, I would also like to start taking on some small Drupal-based projects to go side-by-side with that.

Some of the services I am planning to offer in the New Year include:

If you're interested in taking advantage of these freelance Drupal services for your project, please contact me to discuss your needs.