Overwhelmed by the amount of coverage in the worldwide media about the Royal wedding? If so, you may be interested in checking out a simpler source of news about Prince William and Kate Middleton:

are they married yet.com will tell you all you really need to know about the occasion.

2010 is quickly drawing to an end, so I'd like to take a moment to wish you all a Merry Christmas from a snowy Isle of Man, and hope you have a very Happy New Year!

For the month of November I have been growing a moustache for Movember, all in aid of charity. Movember is about raising awareness and funds for prostate cancer and other cancers that affect men.

The Mo, slang for moustache, and November come together each year for Movember.

Movember challenges men to change their appearance and the face of men’s health by growing a moustache. The rules are simple, start Movember 1st clean shaven and then grow a moustache for the entire month. The moustache becomes the ribbon for men’s health, the means by which awareness and funds are raised for cancers that affect men. Much like the commitment to run or walk for charity, the men of Movember commit to growing a moustache for 30 days.
Movember.com

I have been part of a team of guys from (or living on) the Isle of Man, the Manx Mo brothers, who have so far raised £234 for charity. If you'd like to help us improve on this figure while donating to a worthy cause, please donate a little to me or to the team through movember.com.

When planning my purchase I was torn between the iPod Touch and the iPhone, the only differentiating factors being the camera and the phone capabilities (and therefore its ubiquitous data connection). At basically the same initial price for both, it didn't make sense for me to go for a mobile phone with an 18 month contract that had a below par camera when I could also go for a free Nokia N95 and its embedded 5 megapixel camera while paying around the same amount of money on a contract. Thanks to my employer I already had a chance to try out Nokia's internet enabled camera and loved its quality and ability to post photos directly to the internet and am looking forward to being able to do that again in the near future.

There's quite a bit of overlap between the iPod Touch and the N95, but the Touch has an interface that's just so much nicer to use than the N95, for mail and web browsing especially. Talking of overlap, at eight gigabytes the device isn't big enough to hold my entire iTunes collection, so I don't think I'll be ditching my 80 gigabyte iPod Classic any time soon.

Despite being very pleased overall with the Touch, there are a few things that I'd really love to see added to the device:

Without a cellular data connection, the wifi on the device is very important for those times you want to access the internet when out and about. There are a number of UK companies and organisations starting to provide free wifi in their premises (e.g. Wetherspoons pubs, McDonalds, local libraries and other places) and in public spaces which is great, and the Cloud has dropped their monthly fees for iPod Touch owners to a price that mirrors what you'd pay for a single hour at most wireless hotspots.

It's also amazing how many other venues have wifi available in them thanks to some unknown third party provider. This is a grey area when it comes to the law though, with wifi theft already being punished under the Communications Act 2003 in a number of cases. I say it's a grey area because there is often no easy way of telling if an open wifi hotspot has been intentionally provided free of charge either by a venue or by someone else actively sharing their connection for passers-by.

Reading through one of the recent New Scientist issues last week I was amused by a line in a story about SETI and how the search for extraterrestrial intelligence must go on.

The story starts off with a comment that "[w]e live on a planet swamped by life forms yet we don't know how life got going, or where." Despite knowing so little of our own planet, the author later suggests that we know exactly the kind of signals that aliens will send to earth. He mentions the Allen Telescope Array that is "designed to pick up the kind of signal that an alien intelligence is most likely to send out into the universe: for example, a series of prime numbers transmitted in binary on a very narrow spectrum of radio frequencies."

I wonder, how exactly do we know what intelligent beings out there are going to be sending to us, if they do indeed exist, and want to send anything to their distant earthling neighbours?

I was tagged by Nick Black a little while back as part of the 5 things you don't know about me meme that's been making its way around the internet. I've been putting it off, but here goes with five things that you may not already know about me:

And now to tag 5 people to do the same: Martin, Victor, Ivan, Adrian and Benjamin

23 years ago to the day, Apple Computer, Inc. announced Macintosh. The bold commercial aired during the Superbowl, one of the most widely watched (and therefore expensive) television slots of the year in America. Something new was about to hit the computer industry with a bang.

I grew up using Macs in school and at home (between them including the Macintosh Plus, SE, LCIII, Classic, Color Classic, Performa 5200, a Mac clone and finally the iMac G3) but then switched to Windows PCs during my A-levels (programming in Visual Basic on a Mac wasn't really an option) and through university, where it was only really practical to have a PC because of the programmes I needed to use.

I was so happy to stop using a PC and go back to using a Mac in 2005, and am having a hard time trying to convince myself that I don't want a nice new MacBook.

I realised the other day when celebrating a colleague's birthday that my birthday this year is something that only happens once in a lifetime. I turn 24 today, on the 24th of August. 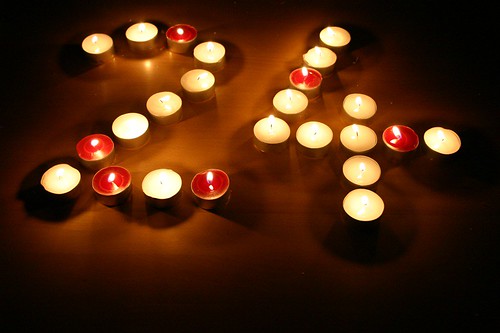 Whilst trying to retrieve an email that I'd accidentally managed to banish to my Spam folder in Gmail I noticed something that made me grin. In place of their web clips they offer up Spam Recipes. Talking of Spam, I also tried to watch a Monty Python movie today. This is, until I realised my Australian flatmate's Xbox only plays Australian DVDs (and a few random Region 2 ones, for some reason). No Monty Python for me today, but somehow it lets me play Ghostbusters 2.

This weekend I am travelling up to Hannover to visit the CeBIT - the biggest technology show in the world. Despite the couple of open source conferences I've been to in the past months (OSCMS and FOSDEM), I've not been to a technology expo for a long time. The last one I went to must have been over ten years ago, when I managed to convince my parents to take me to a MacExpo when we were visiting London at one point.